Last week, we hosted picture book author Jill Esbaum.  This week, we've got another very prolific author with a long list of impressive credentials!  Please bear through the lengthy introduction -- but this guy (and our only 'guy' judge at the moment) is quite a seasoned writer.  Without further ado, let me announce this week's guest: 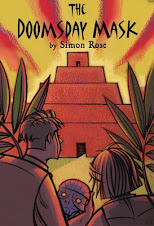 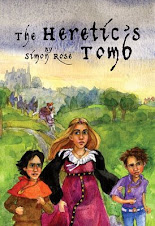 About Simon Rose
Simon was born in Derbyshire, England. He graduated from university with a degree in history and has lived in Canada since 1990. He is also a graduate of the Institute of Children's Literature of West Redding, CT. Simon and his two children, dog and cat live in Calgary.

Simon’s first novel for middle grade readers, The Alchemist’s Portrait, was published in 2003 followed by The Sorcerer’s Letterbox in 2004, The Clone Conspiracy in 2005, The Emerald Curse in 2006, The Heretic’s Tomb in 2007 and The Doomsday Mask in 2009 and The Time Camera in 2011. The Insistence of Memory, a novel for young adults, will be published in 2012. Simon is also a contributing author to The Complete Guide to Writing Science Fiction Volume One, has written several non-fiction books for younger readers with Weigl Educational Publishers, and works as a writer for Dark Roasted Blend online magazine.

Simon offers a wide variety of presentations, workshops and author in residence programs for schools and libraries, covering such topics as the writing process, editing and revision, where ideas come from and how writers turn them into stories, character development, historical fiction and historical research, story structure, the publishing world and more. He also offers virtual author visits by video using Skype. He works as a creative writing instructor for home school students throughout the year and at summer camps each July and August, is an instructor for adults with the University of Calgary, Chinook Learning Services and offers a variety of online workshops for both children and adults.

Simon is a regular presenter at conferences and festivals, and served as a juror for the Governor General’s Literary Awards for Children’s Literature, the Saskatchewan Book Awards, the Parsec Awards and the Sunburst Award for Canadian Literature of the Fantastic. He is the founder of Children’s Authors and Illustrators on Facebook, served as the Assistant Regional Advisor for SCBWI Western Canada and organizes the Calgary Children’s Book Fair and Conference every November. Simon offers a number of services for writers, including manuscript evaluation, editing, writing workshops and coaching, plus copywriting services for the business community.

Miranda:  Whew.  That's impressive.  With an intro like that, what else can I ask?  Hmmm...Let me try.  Did you always want to be a writer?

Simon: No, not really. Once I had children of my own, I came into contact with children's books again for the first time in many years. Picture books initially, of course, but then early chapter books and novels. When I decided to try my hand at writing novels and stories, I found myself drawn to the types of things I used to read as a child. I read lots of science fiction, as well fantasy writers and ghost stories while growing up. I also read a tremendous number of comic books, in which the stories took me across the universe, into strange dimensions, into the land of the Norse gods or had me swinging from the New York rooftops. At high school, I studied a lot of history and have retained my interest in the subject up to the present day. I also read voraciously on ancient civilizations, mysteries, the supernatural, and the unexplained.

Miranda:  Interesting that you began with picture books.  I think a lot of Rate Your Story submitters are starting with those too!  But some also write MG and YA and are seeking publication.  Which brings me to ask - At what point did you begin to know your writing was good enough to get published?

Simon: I took a writing course with the Institute of Children's Literature and began submitting stories and ideas to publishers around the same time. Shortly afterwards, publisher took an interest and the first novel was published in 2003. The rest, as they say, is history.

Miranda: Great to know! I also took their writing course and found it to be very helpful especially in terms of revision and marketing my work.  The instructors are very helpful.  And you're a teacher too, right? What are the top three things that you tell students about writing stories?

Simon:  1) Don’t be afraid to revise and revise over and over again. Most authors go through many revisions before their work reaches its final format.

2) Remember, too, that your book will never be to everyone’s taste, so don’t be discouraged. A firm belief in your own success is often what’s necessary. After all, if you don’t believe in your book, how can you expect other people to?

3)   Read as much as you can and write as often as you can. Keep an ideas file, even if it’s only a name, title, sentence, or an entire outline for a novel. You never know when you might get another piece of the puzzle, perhaps years later.

Miranda:  Great advice.  Now since you mentioned outlines...which I'm not always good at...Do you begin with an outline?  A character?  A chapter?  Tell us a bit about your writing process.

Simon: I always create a detailed outline of a novel before I start work, but not all writers work this way, no matter what their preferred genre. The outline is usually a paragraph for each chapter of the book and can be as long as 10,000 words, depending on the length of the novel.

Miranda:  Impressive.  Then what happens? How many times would you say a book gets revised before it finally makes it to print?

Simon: Writing is in some ways the easy part. It can be a very long process not only to write a book, but also to get it published. A book is a marathon measured in years rather than weeks or months. Depending on the length and reading level of the book, as well as the experience of the author, it can be revised ten or twenty times. However, there are obviously no set rules about this and every project is different.

Miranda:  Now, der, hey  - you're from up there in Canada (*waves across the lake*).  Is the Canadian writing scene different than the US?  We've had submissions from around the globe, so I'm wondering if you see the landscape for writers as different up there.  Thoughts?

Simon:  The scene is probably pretty much the same, although there are more publishers in the USA and more people submitting to them.

Miranda:  It does seem like slush piles are quite large here!  I just received an acceptance after seven months of waiting (for a short magazine piece!).  So, Simon, can you leave all of us writers with some strong advice for how we can establish ourselves in such a crowded industry?

Simon:  If you become a published author, you also mustn’t forget the marketing. You may produce the greatest book ever written. However, no one else is going to see it if your book doesn’t become known to potential readers. Be visible as an author. Do as many readings, signings, and personal appearances as you can. Get your name out there and hopefully the rest will follow. Especially for newly published authors, books don’t sell themselves and need a lot of help.

Miranda:  Again, great advice.  Now where can everyone find out every speck about you that we may not have covered here?

Miranda:  I think that covers it!  Thanks so much, Simon.  Congratulations on all your successes and on behalf of all Rate Your Story visitors, thanks for the wonderful service you provide.

Comments are open below if you'd like to send Simon a message.  And don't forget to stop by next Wednesday for an interview with Rate Your Story judge Margot Finke!