Our next guest is lively, hilarious, and -- quite frankly -- more open, honest, and accepting of faults and mistakes than many of us.  She's taken a few slips, and encourages others to share theirs every week on her blog.  With the week I've had, this is the perfect writer to welcome to Rate Your Story.


And here she is: 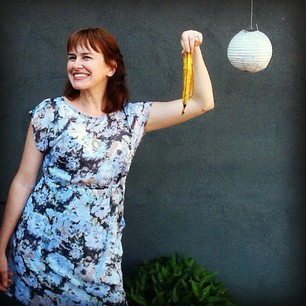 (FYI before we get to Elizabeth's lovely article - Rate Your Story is CLOSED to submissions.  Don't worry if you are one of the several people who had a banana peel moment and forgot to check the submission guidelines before hitting SEND...I won't tell.  But we'll reopen after Aug. 8.)


CRITIQUES FOR CONTROL ENTHUSIASTS LIKE ME
By Elizabeth Stevens Omlor

In order to get things done, I usually like to work on my own. This way I have complete control as the sole overseer, the jefe, the boss. Some may say I am a control freak enthusiast. Sometimes, this approach works wonderfully. Other times not so much. Writing, I have learned, while it may seem like a solitary experience, is ultimately done best with the help of others.  But I didn’t always know this.

Learning to critique or be critiqued is a process. It takes time.  There are several stages of this learning curve that I have taken upon myself to link to eggs. Why eggs? High in protein, eggs are what I ate for breakfast. And they were tasty.

Each person has their own writing style which ultimately leads to how they critique. On the receiving end, often you submit your work of pure and simple genius for critique only to get a flood of conflicting advice on how to improve your story. Ack! Enter Scrambled Egg Brain.

Perhaps you feel the onset of the stages of grief. Feeling overwhelmed, you might throw a tantrum. You might mope on your couch for two days hugging a pint of Ben and Jerry’s.  Or you may choose to get to work right away. Making every change that was recommended, you press the print button and voila! You read your new and improved masterpiece aloud:

Huh? That isn’t your voice! That isn’t you! You are lost and confused. Your thoughts are all over the map! Scrambled Egg Brain is at its worst! Enter the next phase.

PHASE TWO:  SITTIN’ ON THE EGG

So you saved your original manuscript thank goodness, because now you are reconsidering all those changes you made. You look at the comments you were given originally and now you ask, is there a common denominator? Was there anything that was recommended repeatedly?  Was there something that made complete sense, that really seemed to resonate with you? Focus on those but, don’t run and make all of the adjustments at once. Just think about it for a while. Sit on that egg until it is ready to hatch… or until you’ve run out of Ben and Jerry’s.

Critiques can cause feelings of vulnerability or loss of control. But perhaps the hardest thing to swallow about critiques is that they represent change. Change to our original thought, to our baby, and that is SCARY. But ultimately, isn’t change good? After all, change is what we ask our main characters to do, right?  It’s how we learn and how we grow.

Blake Snyder, author of Save the Cat! The Last Book on Screenwriting That You’ll Ever Need, wrote about this very subject as it relates to a book’s characters. I saw a connection between the excerpt and critiques and really life in general, bad guys and all:

The measuring stick that tells us who succeeds and who doesn’t is seen in the ability to change. Good guys are those who willingly accept change and see it as a positive force. Bad guys are those who refuse to change, who will curl up and die in their own juices, unable to move out of the rut their lives represent. To succeed in life is to be able to transform. That’s why it’s the basis not only of good storytelling but also the world’s best-known religions. Change is good because it represents a re-birth, the promise of a fresh start.


So we have to get creative. We calm that Scrambled Egg Brain of ours, we unearth the egg we’ve been sittin’ on, we whip out a frying pan (preferably non-stick) and… make an omelet!
The best thing about making an omelet is that YOU choose what goes in! How fancy is that? We control to what degree we want to change our masterpiece by leaving out or adding certain ingredients.  (Welcome back control! Oh, how we’ve missed you!)

There are always suggestions of course from top omelet mixers that have come before us. For example: It would be advised that you do not throw things like stinky socks into your concoction. Ewww…. But if you have a place on your palate for feet flavor, who is to say that it is wrong? There may be a good reason for it. Maybe you lack some kind of nutrient only provided by a dirty sock. Ultimately, only you know.

The goal is to produce some kind of firm but spongy goodness. In the end, you have to look at yourself and realize that no matter what kind of critique your receive or what reaction may spew out of you, you have some major huevos. (Literal Spanish translation = eggs. Colloquial translation, look it up.) You have put your best work out there to be analyzed and scrutinized. And for what? So that it stay the same? Remain a messy plate of scrambled eggs or worse yet, an uncooked egg? You want change and that indicates you want to succeed.

With practice, we will become expert omeleteers. But growth and expertise will only surface if we open our hearts and minds to change. And that means being less enthusiastic about control and more enthusiastic about learning from our mistakes.

Elizabeth Stevens Omlor loves slipping on banana peels. She has at least one slip a day, physically or verbally.  Her passion is writing for children, although she has recently discovered she is a delusional rhymer. When she isn’t writing for little people, you can find her having kitchen dance parties with her husband and two children or drinking a large glass of milk. Yum. She loves milk. Especially when it’s in chocolate. She blogs about all of this on Banana Peelin’: The Ups and Downs of Becoming a Children’s Writer.