HOW I GOT MY AGENT, OR DON'T TRY THIS AT HOME by Anne Belov

After banging my head on my computer for more than five years of trying to entice an agent into representing me, I finally got one. Huzzah! But if you are looking for an account of the methodical researching of agents, crafting and polishing query letters to a brilliant shine, so that you can duplicate my effort, this will NOT be that post.

Back in 2009, the recession and the slowed economy caught up with my art career. Rather than panic and get a day job (did I mention I’d been a self-employed artist for 21 years? Who would hire me?) I did what any sensible person would do. I started drawing pandas.

If you’re wondering what pandas have to do with getting an agent, be patient. I pinky promise that there is a connection.

When I moved to Whidbey Island 30 years ago, one of my first friends was writer Deb Lund. She had been working on writing for children for a while, and now has half a dozen+ published picture books. In that kind of offhand way that is the start of so many great things, she said, “You ought to illustrate picture books.” I said something like, “Oh sure, in my spare time.” 20 years later, I had more spare time than I wanted.

When the economy crashed, I started drawing pandas to cheer myself up. Eventually this became a comic with a growing cast of characters, and I started a blog to inflict/share them with the world. I then remembered Deb’s comment of 20 years previously, took a Writing for Children class from her, joined SCBWI (Society of Children’s Book Writers and Illustrators), went to a regional SCBWI conference and started on a picture book project. That project became a wordless picture book called Pandamorphosis, about a cat who turns into a panda. It took me close to 4 years to write, draw, edit, and draw some more. I had several very useful critiques through SCBWI, including some with agents and editors. One of those lead to an extended back and forth, but alas, no offer of representation.

I made all sorts of mistakes querying Pandamorphosis, including after a very promising conference critique with an art director, sitting on my hands and not querying further for more than a year while this dream publishing house considered my book. In the end, I got so discouraged with the “I love your art, but this project is not speaking to me, but do contact me for your next project…” rejections, that I put Pandamorphosis away. Eventually I decided that if I didn’t clear the decks and do something with it, it would mentally block my doing anything else, so I got some editing and design help and self published it, funding those editorial and production services with Kickstarter. 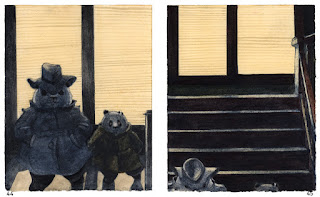 Meanwhile, my internet comic The Panda Chronicles was burbling along, gaining readers and supporters. I started publishing collections of the comics through CreateSpace, but I still wanted an agent. As I traveled along the comics road, I started writing extended story lines that would last for 10 episodes or more. Finally, in 2014, I wrote a 47 episode Panda detective story. (each episode being roughly 4 panels) I thought that with some serious editing, it could be reworked into a middle grade graphic novel.

In one of those random cosmic things that sometimes happen, right around this time (now the spring of 2015) I chanced on an announcement for the Nevada chapter of SCBWI’s mentor program beginning in the fall of 2015, with application deadline and acceptances happening in the late spring to early summer. The announcement led me to their list of mentors and what genres and age groups each mentor was looking to work with. One of the mentors was an agent with an interest in graphic novels. There was another mentor who had worked in publishing as an editor, and was now working as an independent editor. He included middle grade in his lists of genre/age groups.

So, with these two possibilities to work with, I read the application directions…oh…about 347 times, got my materials together and sent them in. I spent three months obsessing over whether this would be the dumbest project they’d ever seen or the most brilliant work of genius. One day in early August, I got a phone call from Naomi Canale, the co-coordinator for the mentor program saying that I had been accepted. As it turned out, both my selections for mentors wanted to work on this project with me, but Gordon (the agent) won the toss.

Okay, okay already. When are you going to get to the part about how you got your agent?

This mentor program was structured so that you met with your mentor in a weekend conference with all the other mentors and mentees, set up your work plan, then check in monthly with your mentor, sending work back and forth via email. The program concludes with everyone getting together again, and discussing where your project needs to go next.

I had initially applied to this program to up my writing/illustrating game, to where I could make the leap from “encouraging rejections” to actually getting an agent and getting published in the traditional sense. If I did not get into the program, I might have kept trying to enter through those guarded gates of publishing, but more likely, I would have continued self publishing my comics through CreateSpace (which I still do: 7 collections of The Panda Chronicles, with the 8th on it’s way) and selling books on Amazon to my loyal readers.

So here’s the cute, How I got my Agent, part of the story. We had all arrived at the final mentor program weekend in Carson City, Nevada. The first event of the weekend was meeting with your mentor to see what your WIP needed to make it submission ready.

During the last few months of our online exchange of revision notes, I could tell that Gordon was getting to know who my characters were, and he made several comments that made me feel like he really “got” what I was doing. He knew what my work habits were like, (not to mention my sparklingly witty personality!) and I got to know his editing style. So with all this in the back of my mind, when we came to the end of this meeting, he asked if I had any questions, the question that popped out of my mouth was, “Um...do you want to be my agent?”

He kind of smiled, and casually said, “Um…yeah.”

I spent the rest of the weekend in a bit of a daze. We didn’t talk about it again and I started running on the hamster wheel of anxiety. Did I do that? Really? Was he just saying “yes” so he could make a safe getaway?

During the weekend, each of the mentors gave a presentation to all the mentees. Gordon’s was the final one of the weekend, and his presentation focused on the projects of both his mentees and what each of our projects needed before being ready for submission. He finished his presentation, and then said, “I’m going to tell you a story that will probably embarrass Anne,” and then proceeds to tell the story of how I asked him to be my agent. And then he said, “Yes, Anne, I’ll be your agent,” and the whole room burst into applause.

Now, I have to say that I got lucky in several ways. First, that I discovered through the mentor process that I could take editorial direction, and second that I found  someone who “got” my work and my humor. I went into the program hoping to shape my book into something that could be traditionally published. I hoped to get help crafting a killer query letter. I had no assumptions that Gordon would become my agent (not that it hadn’t crossed my mind). I had decided to make this investment of time and money in my work and I’m really happy that it turned out the way it did.

So I think that the takeaway here is NOT that you should ignore the rules about querying through proper channels (my bad). But that when an opportunity to attend a program like this arises, be it a mentor program or an MFA program in writing for children, it would be a good idea to take it. You will improve your craft. You will meet people who will be your friends and support in the trenches of writing and publishing. You will connect with people who can move your career forward.

To date, I think at least six of our group of 22 have signed with agents over the last year and a half. My book is still out on submission, but it had an acquisitions close call at the end of the summer. I believe this book series will sell eventually. Meanwhile, you can find me in my corner of the enchanted forest, painting, drawing pandas, and watching panda videos.

About the Author:
Anne Belov is a painter, printmaker, writer and cartoonist. You can find her panda satire at http://yourbrainonpandas.com
Her yet to be published graphic novel, The Pandyland Mysteries: The Case of the Picturesque Panda is a detective story with fine art, a mysterious panda of questionable morals, and more than one panda behaving badly. She lives in a post industrial cottage in the woods on Whidbey island in Washington State. Her main regrets in life are that there is no MacArthur Foundation Grant category for Panda Satire, and that pandas are not among the wildlife that live in the woods behind her house.